{Two of my favorite women completely rocking their twenties.}

Tonight a co-worker and I had the opportunity to attend a happy hour…that started at about 8:45 p.m. She turned to me and aptly said, “A basically 9 p.m. happy hour is no longer a happy hour. That is just a party.”

Spoken like a true 20-something. I’ve been noticing a lot of articles lately about “what it means to be a 20-something” or “signs you’re a 20-something.” While most of these provide endless amusement with their eerily accurate observations, they also promote this sense of unity in knowing I’m not alone. You’d think this would be discouraging to learn I’m not as much of a unique individual as I thought I was, but it’s actually strangely comforting. On one of Soul Pancake’s message boards, somebody asked, “What’s so noteworthy about being a 20-something anyways?” Someone else responded, “Nothing more than any other age.” While I completely agree that this could be true as I don’t have a whole lot of times of life to compare now to, I’d have to say there’s a lot about being at the time I am now that’s noteworthy. I’ve caught myself a lot over the past few months just marveling about how it feels to hit these “milestones” compared to how I thought I’d feel. It’s a strange feeling to spend your whole life wanting to be “old” then finally getting there to realize it’s a whole lot different than you thought it’d be. At the same time nearly everything in my life is changing all the time, and I’m knowing the “adults” in my life a whole new way.

Here’s a couple of the realizations I’ve found myself pondering lately:

Getting married isn’t a happy ending or a solution. And even though there’s a lot of happy engaged couple around you, it turns out the whole process is not nearly as romantic or surprising as you thought it’d be because there’s a whole lot of real life logistics that need to happen as far as jobs, locations of jobs, leases, roommates, and probably so much more.

Being “old” doesn’t mean you have everything figured out. In fact, it seems that most people don’t ever really know what they want or where they’re going. It’s a mix of educated guessing, luck and simply taking the next step. I also know people older than me who have changed their career path completely, taken time off to travel or volunteer for a social cause, etc. There’s not some secret “right” path to life it turns out…and that’s okay. 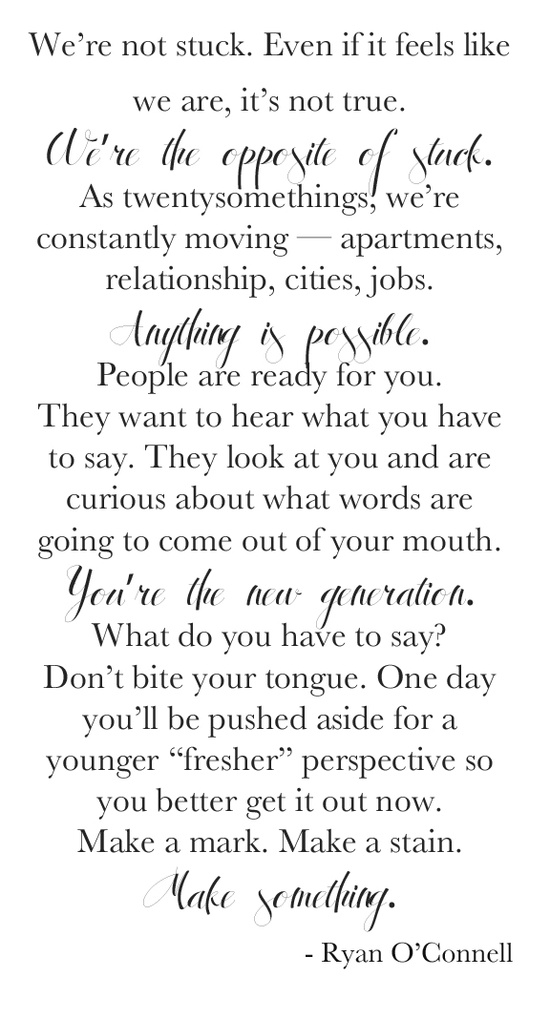 7 thoughts on “This time of life”